all Ships Festival might be just a product of the excitement of a much-anticipated event finally getting under way. Now as day two draws to a close, I’m delighted to report that the spirit is still very much alive and well.

Here are the ways the Tall Ships Festival took me out of the ordinary today:

– Cycling into town dressed as a pirate first thing in the morning – definitely a first (and possibly a last). 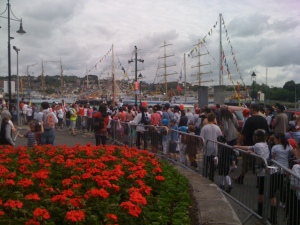 – Strolling up the middle of the Quay mid-morning with hundreds of other “pirates”. We were supposed to be marauding, though I’m not sure we did a great job – do pirates normally chat, bask in the sunshine and carry small children on their shoulders as they maraud?

– Realising that men in their fifties and sixties have a hugely unfair advantage in the piracy imitation game – stick a bandana, an eyepatch and a billowy white shirt on them and they look so much the part, they blow everyone else out of the water (sorry, couldn’t resist…). 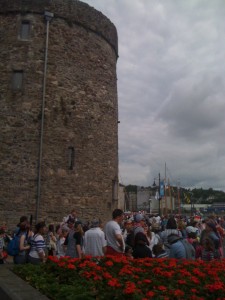 – Leaving a city-centre cafe without ordering when the daughter and I noticed to our total shock that the prices on the “Tall Ships Special” menu were double the normal prices. We were shocked, A – because of the bare-faced cheek of it, and B – because the city authorities had specifically requested local businesses not to put up their prices during the Festival (and most have taken heed).

– Sitting at one of the rows of trestle tables on the Quay, admiring the TS Royalist docked alongside, helping the daughter handle her foot-long hot dog while I tucked into Thai noodles, chatting to friends and neighbours passing by.

Now, like yesterday evening, the sounds of the Tall Ships Festival are resounding out across the City – tonight it’s fireworks, their banging and whizzing oddly dulled at this distance. These evening sounds are wonderful, reminding those of us tucked up at home on the outskirts of the City that the Festival is in full swing.

Now to get some sleep for (hopefully) more marauding tomorrow.