A miscellany of magic

I’m beyond honoured to be included in the new RTÉ Sunday Miscellany Anthology 2008-2011, edited by Clíodhna Ní Anluain and published by New Island. Sincere thanks to Clíodhna, editor of RTÉ’s Sunday Miscellany, for finding a slot for my piece, A Tribute to Mick Lally.

I also had a completely magical evening on April 7th at the launch of the book in the National Concert Hall, Dublin. It was great to meet Clíodhna and Miriam O’Callaghan, who launched the book and said some very nice things about it. It was also really special to chat to Padraig O’Neill, award-winning production designer, who was a close friend and colleague of Mick Lally’s (including on Mick’s last screen turn in the recently-released Snap) and has some wonderful stories from their times together.

The launch was followed by a wonderful Easter Sunday Miscellany concert, with readings from the book by Kevin McAleer, Mary Molloy, Grace Wells, and Kevin Barry, among others, interspersed with music from artists including Altan, Eimear Quinn and the RTÉ Concert Orchestra. The concert was broadcast in the Sunday Miscellany slot on RTÉ Radio One over the last two weekends. Here are Part One and Part Two.

The text of my piece in the book, A Tribute to Mick Lally, is here.

A good dose of reality

Reality is relative. I have recently learned this as a contestant on my local radio station’s take on the current Come Dine With Me craze.

In one sense, my encounter with the reality genre has been one of the most unrealistic experiences I have ever had. Under what real-world circumstances would you encounter the following downright weird scenario: you are required to prepare, serve and host a three-course dinner plus entertainment to three relative strangers, all entirely unassisted, while everything you say is recorded for broadcast on radio? 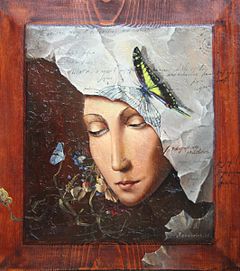 On the other hand, for those of us in the “reality-equals-gritty” school of thought, my Come Dine With Me experience was as real as it gets. It’s possible that my three fellow hosts threw together their divine dinners an hour before each meal (though the standard of the meals strongly suggests otherwise), and probably their houses are always immaculate so they didn’t need to get themselves into a sweat with a last-minute burst of cleaning. Personally, taking the day before my dinner off work, as well as the day itself, spending several days beforehand planning and shopping, neatly slicing off the top of my finger and fingernail when practising my dishes the previous weekend, and to top it all off, having to abandon my dearly-beloved usual weekday uniform of jeans and Crocs in favour of a SKIRT (slyly hoping that its bright pink colour would distract my guests from any deficiencies in my hostessing skills) was more than enough reality for me, thank you very much.

So both extremes of the scale were covered – from wandered-into-the-wrong-film weirdness to gritty realism. Where does fun fit into the reality continuum?

The four dinners were some of the most fun experiences I have ever had. Going over to people’s houses every evening to be served delicious food, get to know some absolutely lovely, funny, talented people (including the presenter and sound engineer), and have cocktails and wine poured liberally down your throat, with full permission to say exactly what you thought of the whole evening afterwards and give your host marks out of ten into the bargain – what’s not to like? Or as my eight-year-old would say: “Uh, HELLO??!”

So how did I do? Nobody knows – yet. The dinner parties have been broadcast on The Saturday Show with Maria McCann on WLR FM, one per show, over the past three Saturdays. Only one individual score for each dinner has been broadcast, so nobody yet knows their total score. The final dinner and results are broadcast on tomorrow morning’s show, when the winner and recipient of the €1,000 (in vouchers for the foodstore that sponsors the show) will be revealed. Keep your fingers crossed for me! (I’d do it myself, only the one I sliced open hasn’t fully healed yet.)

Until then – keep it real.